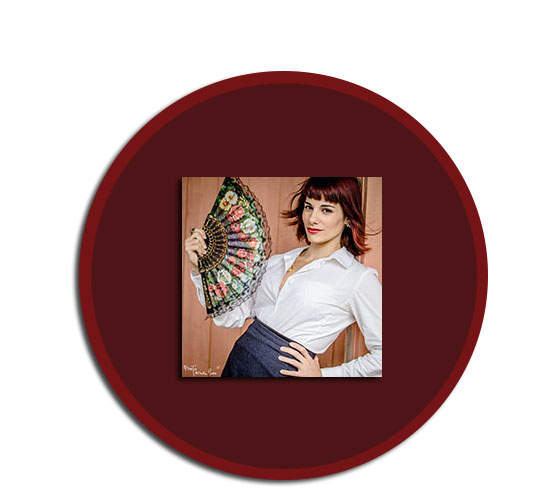 Evita Arce is a Swing dance phemon, known internationally for her endless energy, inspiring performances, and elegant, feminine movement. Whether she’s on stage or leading a class, her vibrant persona inspires on-lookers to dance and live in the moment. She has taught all over the world at Lindy Hop events spanning the US to the UK, Japan to Australia, Canada to Europe. After 10 years of Swing dancing, Evita is most thrilled to be making her teaching debut at Herrang!

As a teacher, Evita’s patience and bright, friendly classroom manor belies the extraordinary depth of her technical knowledge. She is adament about understanding anatomy and efficiancy of movement. Her open, enthusiastic connection with people lends to her entertaining communication in the classroom. Evita has had the great privileged of partnering several amazing teachers including, Michael Jagger, Nathan Bugh, Joel Plys, Manu Smith, and Steven Mitchell!

As a performer, Evita has appeared on television, and on major stages in three different continents. Following in the footsteps of her mentors, Ryan Francois and Jenny Thomas, Evita danced the feature Lindy Hop role in multiple tours of the Broadway musical “SWING!”. At the landmark “Frankie 95” memorial, Evita was among the hand full of performers to appear before 2,000 Swing dancers from around the globe.

Evita is a member of Ryan’s company, Swing Xtreme. With the company, she has performed at The Edinburgh Jazz Festival and the prestigious Lyric Theatre in London’s West End. Evita is also a member of The Killer Dillers who won the team division at ILHC and are quickly appearing all over the world for their array of authentic jazz dances.

Evita has choreographed and danced for Wynton Marsalis and The Jazz at Lincoln Center Orchestra at The Kennedy Center in DC, celebrating MLK and President Obama’s inauguration. Evita choreographed “Sleigh Bells Swing,” a 2 week show in Time Square with George Gee’s Orchestra at the Edison Ballroom. Evita is exceptionally proud of her recent success directing the 2009 New Years Eve show, The Red Hot Rythnm Review, at Lindy Focus.

Commercials and television appearances have popped up frequently since Evita, with partner Michael Jagger, advanced to finals in season three of FOX’s “So You Think You Can Dance”–the only Lindy Hop couple to do so.

You can find many of Evita’s lessons at www.idance.net. Follow along with her many world wide dance adventures at www.evitaarce.blogspot.com.